20 October: European and world mayors and organizations express solidarity with the Mayors of Brdy – Czech Republic 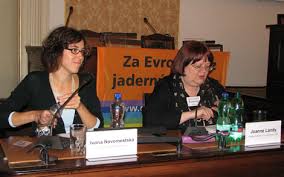 Dear friends,
We would love to invite you for an international meeting within the campaign of Europe for Peace, which will take place on 20th October, in the heart of Europe, in the central Bohemian town of Brdy, the scene of one of the most interesting fights for freedom and democracy in the history of the Czech Republic, and perhaps the whole of Europe after the collapse of the communist regime in 1989.

In the Czech Republic, we, the citizens and mayors have been fighting for our freedom to decide on our country’s destiny for more than one year. We have been organizing nonviolent protests, collecting signatures for a referendum, connecting organisations and citizens from across the Czech Republic against the government who no longer represent our interests. Even though the overwhelming majority of Czech citizens refuse for us to become a host country for a military base of the US national anti-missile system, neither countries’ governments consider these opinions at all, leading this planet through their dangerous decisions towards the escalation of international tension and destruction

Nuclear armament is a global problem. Therefore world celebrities such as Noam Chomsky, Mikhail Gorbachev and Tadatoshi Akiba, Mayor of Hiroshima, together with us are demanding immediate nuclear disarmament and putting a stop to a new arms race. Together with the mayors of the Brdy region we invite you for the meeting which aims to connect our potential and send a message to the whole planet, that we can imagine a different world – a world without nuclear weapons, threat of wars, hunger and suffering.

After the Prague conference on 22nd February, 2007 a European network of solidarity and cooperation started to form which has mainly been an effort to connect all positive powers with the aim of achieving European nuclear disarmament. Many groups are present in this network too, who, despite not being engaged in the topic of disarmament, fight daily for human rights, justice, and against a political system that obstructs real democracy. The 20th October will be an opportunity to show such solidarity, to better learn about one another and plan the next steps togethe

Let’s express solidarity and support to the mayors who are trying to defend democracy and the respect of public opinions against the intentions of the US’s power and its army.

Invitation by Jan Neoral, Mayor of Trokavec community, who were the first to vote against the nearby US military construction in referendum

Let me add to this invitation with a few words to you. Mayors of the Czech Republic are starting to unite in their refusal to have a US radar construction in our country. Unity means power. Our arrogant government disdains the opinions of three quarters of the inhabitants of our Republic. If mayors continue to be active in refusing the radar, we will make the government hear our voices and heed national opinion. The radar means a big danger for European and world peace. Come therefore, please, even your voice will help withdraw this danger.